skip to main | skip to sidebar

Have I mentioned lately how much i despise the OLCC? No? I don't mention it enough, apparently.

Does anyone need a reason to? Is there a piece of paper big enough to finish this sentence?

I've been playing the drums in public a lot. Well, a lot being probably once or twice a week. I have no drums to practice on at the house anymore. Here's a conversation I had last week at the jam, when i played the things for a whole set: (T is a damn good drummer who's opinion i respect)

T: You're getting pretty good on those! You did a great job on that set! You practicing?
Me: Thanks! Um.. no, the drums are gone over to K's house til it warms up again. This was my practice.
T: *odd look*. Well...
Me: T, I have no idea what i'm doing on those things.
T: Keep at it, you must be doing something right!

But damn one gets tired. I kept at it, i wanted to stop about half way through the set, i was about plum wore out, as they say. I'm still getting the hang of how to use the kick pedal right without fatiguing my whole freaking leg. I know i know... use the leg, not the ankle. Easier said than done, for now. The last song i think i pretty much fell apart. I got two swigs of my beer and had to get back to play bass, someone else's bass which was much weirder to play than mine. That'd be the J-bass i mentioned playing. It's much more responsive than my Ibanez. oooh it has brand new strings on it, which makes a diff. But the strings aren't as bendy as mine are. The bendiness makes up for the lack of responsiveness. I can fake it better when i make a farty sound on mine than i could on his. Plus, he has hamburger makers on the J. Roundwounds. And i'm used to flatwounds.

Al Gore- Jesus, man, time to use some more environmentally-friendly transportation, like, YOUR FEET.

I backslid and had a cig yesterday. It was kinda gross.

My dreams have been of pants, jumping, Lunada Bay and hearing the crowd but never seeing them.

I have had more moments than usual of "Well, this is all pointless".

I got to jam on an aquaintance's J-Bass yesterday. It was nice. Sounded great. I wouldn't mind having one.

My friend's boyfriend is terrified of me, which is ok, because he's pondscum anyway. But I wish I knew more women in healthy relationships or a with a decent level of self-esteem around here. I know one.
Posted by pril at 10:16 AM 1 comment:

Keep the lasagna flying.
Posted by pril at 4:15 PM No comments:

and there is no trail of bodies!

Smart Half and I slapped a couple of patches on ourselves last night. I haven't had a smoke since about 11 PM. I didn't want one when i woke up. I haven't really wanted one today. I took a drag off someone else's and went "euw".

I'm hoping the patch works for me. When i've tried to quit cold turkey, my friends beg me to have one after about three days- if i make it that long without one. I'm always thinking about the thing i can't have when i try to go cold turkey.

The Wellbutrin made me homicidal. I just wanted to kill people. No. Seriously. No exaggeration or embellishment there.

I haven't been eating more (yet) and i don't find i need to play with things. To me, that means i'm a straight up nicotine addict. It's never been a "have something to do with my hands" kind of habit for me.
Posted by pril at 2:01 PM 5 comments:

I wish these people would fix their thermometer, or move it out of the sun, or something. Their readings are always like 40 degrees higher than everything else around here.
Posted by pril at 9:53 AM No comments:

we got only the barest dusting of snow last night. Weak sauce.

The last few days we had freezing fog. It never lifted, just hung around the basin all day. With it hard to see my surroundings, i got lost a couple of times, thinking i was somewhere that i wasn't (the coast). Well, that happens to me. There are times i wake up and forget where i am. I guess it happens when you've lived in many houses.

But anyway, the freezing fog left some beautiful decoration behind. Some parts of town, entire trees are covered in a white rime. Over where i live, the ice is on the side of the prevailing wind. That wind comes right off the lake at our house, blowing in a southeasterly fashion, and leads me to understand what "bone-chilling" really means. i go outside with my wooly ear-flap hat, three layers of shirts, big ugly coat with the scorch mark on the back, wooly socks and the sheep boots. And still, "wow it's still cold under all this shit".

We actually have a wind chill warning for tomorrow and friday. The temperatures are allegedly going to dive into the minus range with the wind.

On my desktop, i have a picture of a pristine white beach, turquoise water, blue-as-blue sky and a nodding palm that i found on the Wunderground site. I've been looking at it an awful lot....
Posted by pril at 10:57 AM 2 comments: 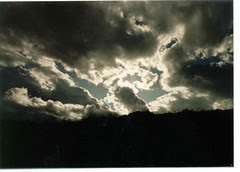 Your favorite band that isn't!

Michele and Turtle have brought back their commenter contributed TOP 50!!!1! list. This time, you get to nominate your favorite fictional band. Spinal Tap? Billy & the Boingers? Steel Dragon? Whatever... go over and leave your mark. These are always pretty fun when they get finished.

Oh yeah, I still write a weekly column over there. Sometimes it's good. Sometimes it's bad. Good god, people, it's enough that they GET the thing from me sometimes. Be sure to click out to the main page and check out what they have up on any given day, and there's good shit in the archives too, of course.
Posted by pril at 5:25 PM No comments:

At Natalie's, i had her scan some old pictures again. The pile randomly grabbed from happened to be mostly from when i was small.

I went to the Evil Empire to show people how to string their guitars, like i had planned to do, and like we had flyers for on the guitars, and no one showed up. Which is ok. I kind of figured that would be the case. I tried.

Saturday I got a good birthday present. It wasn't presented as one, but it was one to me. I got to wail on the drums for an hour at a jam.
Posted by pril at 9:18 AM No comments: 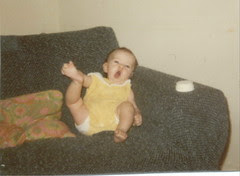 It's been that long since i got to strap on some skates and get on the ice.

I toted a couple of people up to the Bill Collier Ice Arena last night. Two people who had never skated before. I was so excited to be doing it i was about ready to haul them over and shove them out on the rink so i could go, but i was nice and waited for them to get used to how the skates feel, and the walking in them on the rubber mats. And then... we were off!

Well. I was a little unsturdy when i first stepped out. I stuck by Natalie and Rachel as they worked their ways around the rink. Natalie clung to the rail but gamely made two laps around. She even managed to pass a couple of little kids who were also clinging to the rail. Rachel clung for her first lap, then scooted along for another one. I made three, away from the rail. Only three because i stopped a few times to scoot along with them, and then the rink was closing.

But we will go back! They both had fun and want to do it again. Both had new respect for Olympic figure skaters. We'd like to do it at least once a week. It's good excerize and god knows i need that.
Posted by pril at 10:46 AM No comments:

This girl was waiting for the waves to pick up. 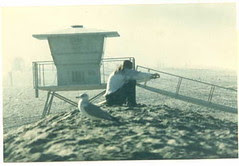 This one and the last one were taken at Redondo Beach, in January of 1995
Posted by pril at 1:02 AM No comments:

I just got some pictures scanned. 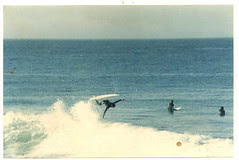 This one is from January of 1995. I hung around the beach for a few days with a camera and took some fun pictures.
Posted by pril at 12:55 AM No comments:

I just dug out the Afghan Whigs album with "Honky's Ladder" on it. I think that's the name of the album, too.

Great album. I still love the "Honky's Ladder" song. What made it stick was "If you want to peep on something, peep what i got stuck between your eyes". I haven't listened to the album much since i started playing an instrument. So, it's been mothballed for 9 years and 6 months, approximately. Songs on it that i remember not really liking much i listen to with different ears, now.

That's one of the reasons i like that i started playing so much later than most people. I have two frames of reference on music, but only stuff that was released up to '97 or so, and things i've heard for the first time since then are picked apart. I lost a lot of the ability to be able to just listen to a song and enjoy it for the sake of it, i think. I have to tell myself to just listen, rather than analyze. Like the song because it's all rawr!!!youfeelittoooo!!!!, not because it has some neat, obscure tripletty diddly-woos and is in D Lydian or some thing like that.
Posted by pril at 11:27 AM No comments:

And then all this stuff in the news. Makes me wonder about my reactions to things. Is what I feel about things the way I really feel about them, or the way I was taught to feel about them? Because I was taught that I shouldn't smile about some jerk swinging on a rope, but I was happy to see it happen, finally. I should care, I've been told, that President Ford is dead. So I tried to, for a few minutes, and then tried really hard to, and then gave up, because I don't remember him as a president very much. I have no connection with him. So, uh, goodbye President Ford. Wish I remembered you with some glowing words and flowery phrases. At least you didn't go out on a rope with shit in your pants.
Posted by pril at 10:22 AM No comments:

pril
If you want to know about me, you should meet me. But I play three instruments and I'm a community college student working toward an AS in Environmental Studies and a transferable AA.